Installation, Cutting out the outer wall of Atsushi Watanabe's studio and selling it at the gallery

Banksy is an internationally famous anonymous street artist by now.

At first, his graffiti were considered vandalism and painted over and removed by public cleaning services.

However, after a certain point his socially critical work started gaining acclaim from the media and art world.

Those who learned of his value began to cut out walls just to put his graffiti up for art auction.

Nowadays it's to the point where citizens will criticize janitors who accidentally clean up his work.

(According to one theory, a list of graffiti art that must not be erased exists for janitors in Europe.)

Oftentimes people tend to place graffiti and art at the opposite ends of the aesthetic spectrum. In actuality social systems distinguish these aesthetics rather than individual values of innate beauty; at times they contradict each other.

I exhibited this piece at an art fair in Tokyo.

The alleyway of the gallery is known for being one of the most graffiti-filled areas in Japan.

When the government cleans it up, they say, "Graffiti is dirty."

The contradiction occurs, however, when the government puts up many signs spelling out the logic of "Eliminate graffiti! Beautify the city!" which in turn ruin the scenery all the more.

At the National Route 246 underpass in Shibuya, the government made vocational school student’s draw over with “appropriate and correct” murals to eliminate graffiti and homeless people. (“Shibuya Art Gallery 246”, 2007.) However, their paintings with no attachment to street culture eventually stopped getting maintained or repaired; the paint faded and the murals decayed. When everyone forgot such a project even existed, colorful graffiti took over its place. Paint continues to accumulate on the walls, through the various battles for beauty that sometimes clash with one another. This piece explores the theme of chaos in standards of beauty and social systems. I painted the words “No Graffiti” in graffiti style on the outer wall of my house, sawed it off with a power saw and displayed it inside the gallery. A collector purchased the piece when I exhibited it for the second time.

[Past Exhibitions for No Graffiti: Promoting Landscape Beautification] 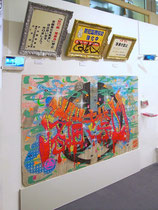 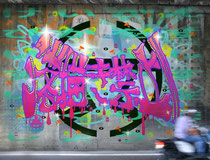 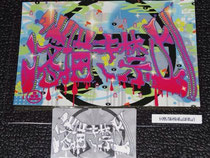 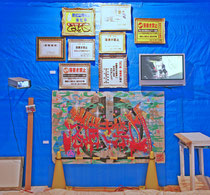 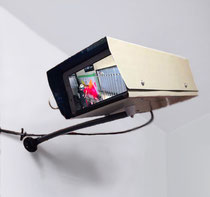