For six months in 2010, Watanabe created a project with his artist friends and lived in Shibuya’s Miyashita Park with homeless people.

Watanabe turned the often-overlooked issue of evicting poor people (with homeless people’s houses increasingly covered up by eviction and fences by the government), which happens in the same city as the luxury department store in Shibuya that commissioned his work, into his idea of “department store art” (which is decorative, conservative, and appropriately lavish) by mimicking a golden folding screen.

The part that looks like gold leaves is actually cardboard he collected in Shibuya. The four corners of decorated metal hardware use empty and cheap low-malt beer cans (some of the people earn their income partly through collecting empty cans.) The work plays with a kind of double entendre; the picture uses the karesansui, or dry landscape garden image, as a front, or an emulated philosophy, to depict a picture of blue tarp houses. It portrays the human presence and the lived-in feel that oozes out even when people try to look away. 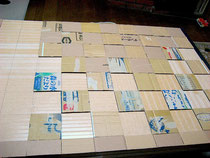 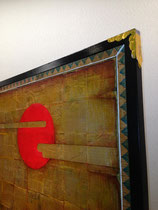 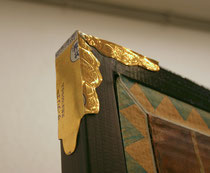