“Do you like meat? What associations do you make looking at the meat lined up at a supermarket? Sukiyaki? Beef bowl? Hamburger? To tell you the truth, I don't eat any meat; I think I'm a so-called vegetarian. It all started when I was researching jobs related to slaughtering. I saw an online video documenting the whole process of a sick cow getting thrown into a shredder alive while crying out loud, gradually getting minced. Perhaps the minced meat also turned into food for other cattle. While watching videos and reading books, I was reminded of the obvious fact that the meat that I liked to eat consisted of pieces of animal carcasses (I actually went to a slaughterhouse later on). I am a working artist whose main medium of expression are painting and three-dimensional objects. For a piece in an exhibition in February 2009, I bought a ton of beef from the supermarket to use as material to restore the shape of a cow indeed on the brink of death. It could even mean gathering and buying tons of various parts of meat, or bits of corpse pieces, to rebuild the entire figure back to when it was alive. My attitude to not consume meat may appear as a kind of boycott, but I intentionally bought a large amount of meat to create this piece. So some people may find it controversial. It is also true however that you can buy an animal corpse killed by somebody else as long as you pay for it. Itadakimasu is the Japanese word for appreciating food before eating it. Do we humans have the right to kill any kind of animal and eat it as long as we say that? I am still not sure how to answer this question and remain torn up about it.

*This video showed the whole process of getting rid of a sick cow by making it into cattle food. It should be noted that after BSE emerged as a social problem, it is ‘very unlikely’ that one would feed a healthy cow minced meat of a sick cow.”

Added note in 2013: Now I eat a bit more meat. As a result of struggling from the obstinacy of Japanese food culture and interpersonal relationships formed through communal eating, I have settled into my current lifestyle. However, I still have my thoughts on ‘the state of humans occupying the most dominant position on earth’ and on ‘animal rights’. 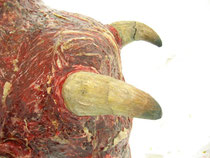 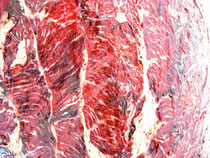 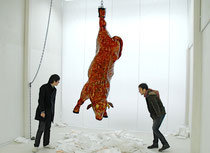 [Past Exhibitions for Corpse-eating Creature]