Just before the 2011 Great East Japan Earthquake occurred, I was being a serious hikikomori, or a person who abnormally avoids social contact, in my room.

Various psychological factors overlapped as causes, including suffering from long-term depression, being betrayed by my fiancé, amplifying anxieties as an artist fresh out of graduate school, and being excluded from the community I was committed to.

Out of spite towards people and society at large who hurt me, I tried to throw away my chances of living a life. In total desperation, I became bedridden and kept my curtains closed.

My hair grew heavy as if coated with butter; I also gained weight.

To avoid facing my family who didn't understand my situation, I kept my urine in plastic bottles.

My mother did not intervene and continued to leave me alone. My father started to plan a forced hospitalization, aiming to exclude me from the family.

Although I continued to stay in my room and gradually prepared to remain a hikikomori for the rest of my life, in a flash of inspiration I came to a halt on the seventh month later.

"I don't want my father to control the rest of my life. I have to protect my mother, who I've realized has become weaker than me."

On the day when I decided to stop being a hikikomori, I shot a self-portrait and the state of my room.

It was the very first step towards social reintegration.

I controlled my cognizance that way to rid myself of my negative mind trap.

"I'm an artist even if I'm good for nothing."

In the spring of 2013, I successfully made a comeback as an artist.

In one estimate, over 3 million people identify as a hikikomori in Japan.

During the Tohoku Earthquake, many determined hikikomori were washed away along with their homes.

On the other hand, some reportedly got out of their rooms because of the earthquake.

In the winter of 2014, I approached hikikomori all over Japan through the internet and called for photos of their rooms to present at my solo exhibition.

In the middle of the space, I placed a concrete house the size of one tatami mat.

The form represents a house being washed away by the tsunami.

Immersing myself again as a hikikomori and considering the Buddhist training elements of being a hikikomori that aren't entirely harmful, during the exhibition I lived inside the concrete house with the walls sealed.

It accidentally developed into a performance to test the limit of my body and mind.

Using a hammer and a chisel, I got out of the house using my own will and strength one week later.

I designed the space with an installation, sculpture, and video

while incorporating my first-hand hikikomori experience and recovery, and actual events that happened in the area after the Tohoku Earthquake.

I projected the photos of hikikomori rooms

inside the concrete house after I escaped from it through a hole.

Not only art world figures, but also people who used to be a hikikomori and some people who sent their own room photos attended the show.

Sensitivity and Excess:
An attempt by an artist who cannot become indifferent towards the world

I realize once again that Atsushi Watanabe is a sensitive artist. This impression doesn't come from learning that he himself was actually a hikikomori for a while. It derives from seeing his seemingly socially critical body of work that appears to point in the opposite direction of hikikomori.

Watanabe’s body of work––starting from the huge portrait of Daisaku Ikeda, Lives of Great Men of the World (3) (2007) to What Abety Has Yet to See (2007), which displayed a gold bar made out of two years worth of his boogers in the basement of the Bank of Japan, and including Shibuya: Blue Tearoom in Dry Landscape Garden Folding Screen

(2013) and KEEP OUT Folding Screen (2014) which depicted Miyashita Park and the Fukushima nuclear power plant accident as folding screen scenes––mixes humor and irony all containing extremity. But if one were to question what about them are so extreme, it would amount to this sensitivity. The dark humor haunting his work almost feels like a shy grin trying to hide that sensitivity.

Over a century after the era which Simmel described, the many dark aspects hidden in the background of cities now flow in at a tremendous speed through our smartphones. The internet is taken over by an immense amount of images of sex and dead bodies; verbal abuse never before heard in everyday life infiltrates our digital environment. Catastrophic stimulation far more destructive than those that Simmel pointed out, stimulation that could fry up one's entire nervous system in a blink of an eye, permeates the 21st century society.

Atsushi Watanabe, having recovered from being a hikikomori, seems like a clumsy person who cannot live being indifferent towards this stimulant society that has grown monstrous. And this fact has created a strange intermix of sensitivity and extremity buried within his work.

When I heard that his theme for this show was hikikomori, I felt that maybe he is attempting to reuse his weakness of not being able to be indifferent into an active weapon of expression through reselecting the attitude with his own will. Put frankly, his experiment of trying to grapple with the world by returning to a hikikomori remains a risky bet. This is because this kind of attempt carries the possibility of being expelled not only from art but from society as something drastically different from art that is ‘doing well’ in society.

But weren't artists originally the kind of people who couldn't become insensitive to such stimulation? Being a hikikomori does not consist of indulging in one's world and cutting ties with society, as generally understood. It is quite the opposite. It is a final survival technique to protect oneself when one can no longer continue bathing in this hopeless world's systemic stimulation. It is a kind of illness, but also a methodology bearing the possibility to understand the world through a different and privileged way.

Watanabe likely chose to become a hikikomori to gain that technique as an art practice. In any case, this exhibition will surely offer a grand site not to be missed, as I believe that Watanabe will win this bet.

Yoshitaka Mori is Associate Professor of Tokyo National University of Fine Arts and Music. Associate Professor. He received his B.A. in Economics from Kyoto University and obtained his M.A. and Ph.D from Goldsmiths College, University of London. His research specializes in sociology, cultural studies and media studies. He is the author of numerous books including Sutori-to no shisou (NHK Publishing), Culture=Politics: Cultural and Political Movement in the Age of Globalization (Bunka-Seiji, Getsuyo-sha) and co-author of The Practice of Cultural Studies (Jissen Karuchuraru Stadeizu, Chikuma shinsho) and more.

Lives of Great Men of the World (3)

What Abety Has Yet to See


From the day before the opening of the exhibition, Watanabe seals himself inside the concrete house and starts living there. There's a sensor light inside that lights up a light bulb hung in the venue when he moves (or is awake and alive). The venue does not light up when he is not moving (or is sleeping or dead). For about a week, Watanabe uses a hammer and a chisel to crack the wall on the door side to come outside. Then, photos of current hikikomori's rooms gathered on the internet are projected as a slide show inside the house on the PC monitor screen. 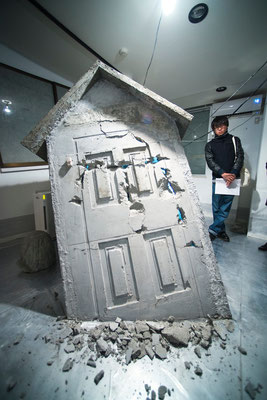 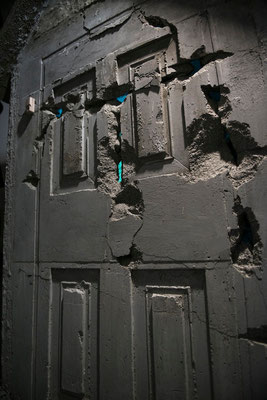 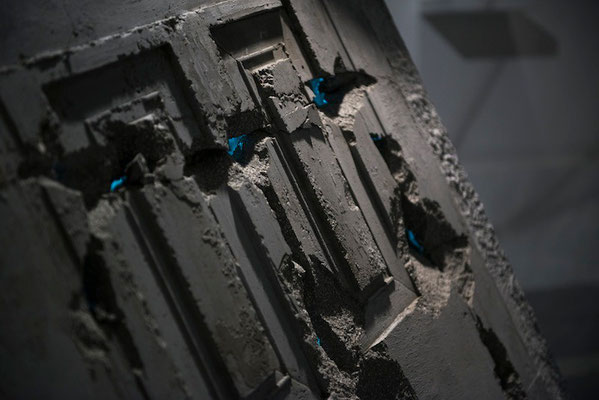 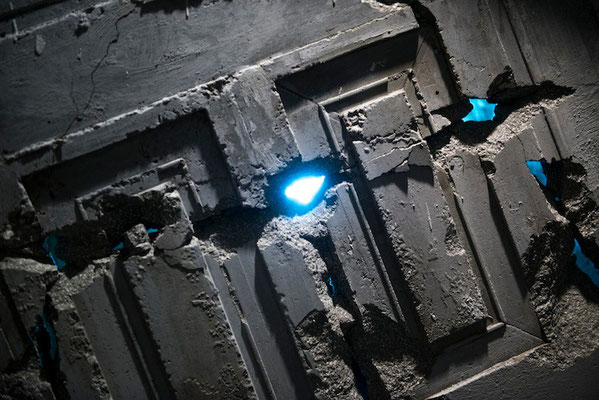 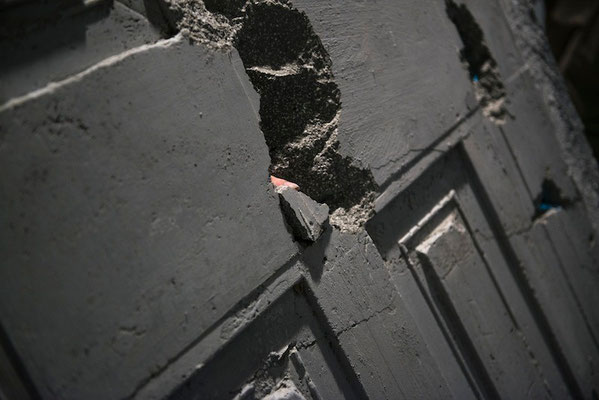 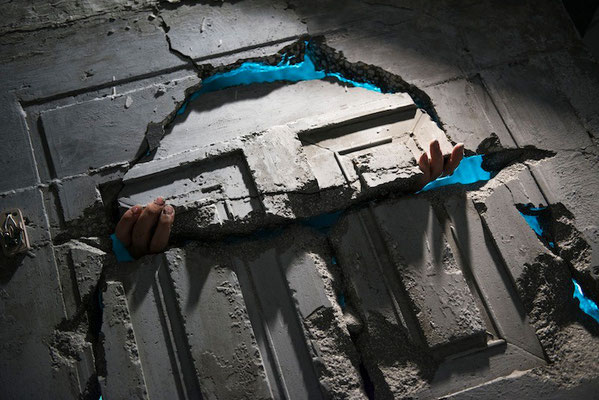 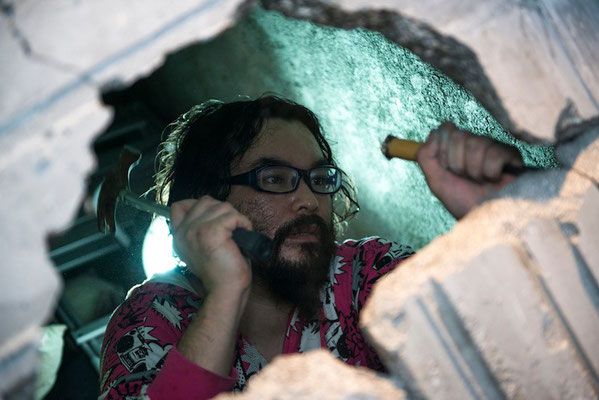 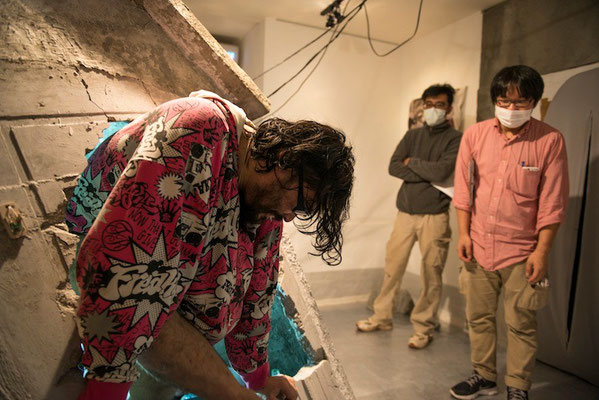 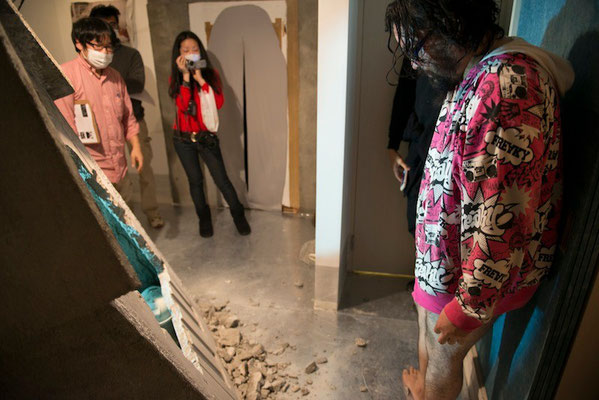 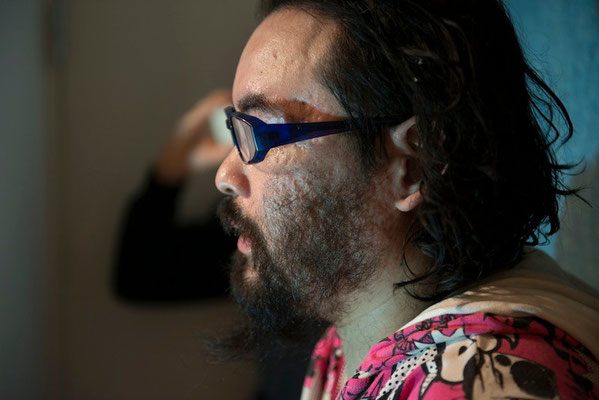 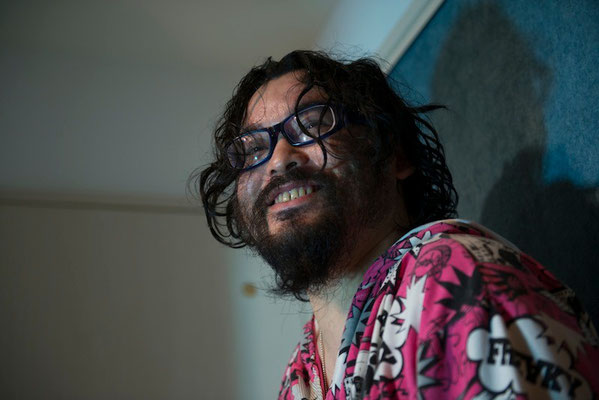 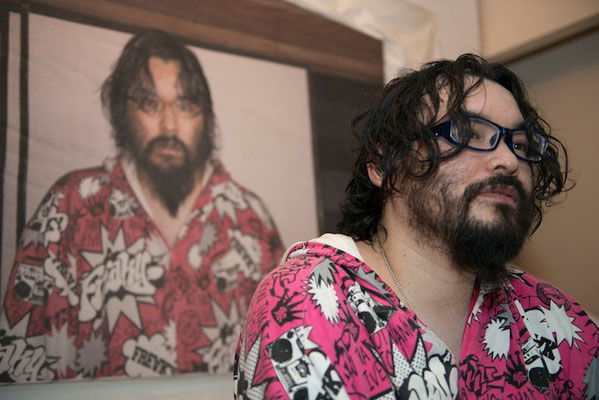 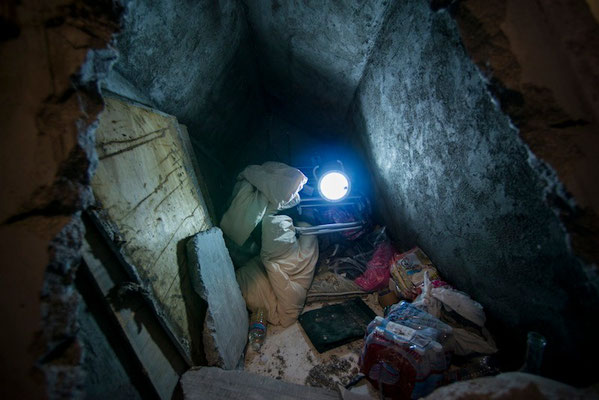 A fragment of the concrete house wall where Watanabe stayed in during the exhibition period.

The East and West Germany "Berlin Wall" fragments were sold as memorial souvenirs at the time of the collapse. Referencing that visual style, Watanabe sold limited editions of the fragments of the concrete wall that he destroyed on his own and came out of. They sold out during the show.

Inside and Outside, each 3 min.
Video editing: Noboru Kamata


A recording of Atsushi Watanabe's performance for this exhibition, sawing out a hole in the actual door of his room in his family's house, where he used to be a hikikomori. From the inside of the room, he comes outside. He re-enacts his hikikomori-self back then with his clothes, hair, and beard. The video was filmed separately as <Inside> and <Outside>, and projected on both inside and outside of the wall with the hole in the gallery.

This is a self-portrait taken on the day Atsushi Watanabe decided to quit being a hikikomori. Watanabe reproduced one of the futon covers that he used at the time and printed on it. The image is fitted into a wooden frame for oil paintings.

A photograph of Atsushi Watanabe’s room shot on the day he stopped being a hikikomori. It shows the space around the bed where he stayed all day. The plastic bottles with his urine are included in the shot. He reproduced one of the pillow covers used back then and printed the image onto it.

February 11, 2011. Deciding to stop being a hikikomori after more than seven months, Atsushi Watanabe took this self-portrait to control his mind, telling himself it was role-playing the whole time. Poster (Yellow) is a photograph of his own reflection in the mirror. It quotes Andy Warhol's words, "In the future everybody will be world famous for fifteen minutes." Poster (Pink) is shot using a tripod. This image was also used for the exhibition's advertising mail.

One of the maquette for the actual production of the piece.

Door (the actual door of Watanabe’s room where he was a hikikomori for a long time), stretch fabric

[On the call for hikikomori people’s room photo submissions]

I called for current hikikomori people to submit photos of their rooms as materials for a work presented at the exhibition. My blog includes writing about the submission process as well as of my own hikikomori experience. There were over 50,000 views within one week of making the post.