Solo exhibition "My wounds / Your wounds"

Atsushi Watanabe has continued to create works that fuse personal themes based on his own experiences with various social problems.

In recent years, he has been producing art inspired by the fact that he himself used to be a severe hikikomori (*1). According to one estimate, there are now supposedly over 1.5 million hikikomori in Japan. However, as the actual circumstances of the hikikomori themselves are hidden from view, this has become a serious social problem with no magic bullet in sight, notwith- standing its potential to strike almost anywhere. In recent years, the social phenomenon of hikikomori against the backdrop of cultural and financial circumstances in Japan has begun to gather attention overseas and be discussed using the original Japanese word "Hikikomori".

*1 Hikikomori: A social issue facing Japan wherein people shut themselves in their rooms or homes, isolating themselves from human contact. The reason may be due to modern mental illness such as depression or anxiety disorders and may involve cultural and economic circumstances. Hikikomori has also become a social problem in countries other than Japan in recent years.

For his past piece Suspended Room, Activated House (2014), Watanabe sealed himself in a concrete house-shaped structure the size of a single tatami mat for one week, effectively restraining himself physically, before escaping under his own steam using a hammer and chisel. In this extreme performance within an installation made of concrete, he drew on his own experience as a hikikomori to express "rebirth from captivity", a theme that can be traced back to the concepts of "ritual death and rebirth" in mountain asceticism and "introspection"(*2), which originated in Buddhism. Before holding this solo exhibition, he also went online to seek submissions from actual current hikikomori of photos of the rooms they were living in, and exhibited the 60 photos that he collected. During the exhibition, Watanabe himself was surprised by several actual hikikomori who came to see his work. This exhibition received considerable media coverage on TV and in magazines and newspapers. This time, we are exhibiting video 7 DAYS OF DEATH (2017) that recreates this work.

*2 Introspection: Introspection here refers to the method of cultivating the mind developed by the Buddhist priest Ishin Yoshimoto (1916–1988), by taking "Mishirabe", the method of self-reflection practiced by religious groups of the Jōdo Shinshū sect of Buddhism, and removing the elements of religion and penance in order to make it more accessible. This involves a deep reflection on yourself through relationships with people close to you, such as your parents, by focusing on three perspectives during a one-week retreat, and is carried out in the space of half a tatami mat when one is awake, and one tatami mat when sleeping. Watanabe experienced the introspection process twice in the course of overcoming hikikomori.

Watanabe again sought submissions through his website for the "Tell me your emotional scars" project (2016- ). This was a project that sought anonymous stories about personal psychological wounds, and has received around 700 highly personal written works to date in a variety of languages, not just Japanese. The art is created by writing the submitted text on a concrete board, breaking it with a hammer, then mending it using kintsugi (*3), a traditional method of repairing pottery. This production process, which expresses the hope that "Emotional scars will shine one day," shares images of each piece as it is repaired in real time through Watanabe's social media.

*3 Kintsugi: A traditional method of repairing pottery by using lacquer to mend broken or chipped pieces, and decorating the mended portions with gold. The cracked work does not return to its original state, but the scars, cracks, fissures, and chips that are usually seen as a sign of deterioration or loss of value are given life to hold a different value, and dazzle in their new state. This technique is also called kintsukuroi, or gold mending.

In addition, Watanabe made a collaboration with his mother "My Scars / Your Wounds" in 2017. When he was a hikikomori, the scars on "this side (me)" of the door were also borne on "that side (you)" of the door. This realization was one of the reasons that Watanabe was able to overcome hikikomori. They will destroy a miniature model of the Watanabe home, then each will attempt to repair it while talking about what it was like at the time. The scars that Watanabe himself bore in the past have been sublimated through noticing other people's scars and facing them through his activities as an artist. He is using his own history of repairing his scars to propose to society, through his art, a mutually supportive attitude that will keep weak selves/someones from being left in the lurch.

“Tell me your emotional scars” project

[“At that time, I got angry with my mother whom stopped intervene in to me,

I went out of my room which I had been housebound for few months, and I kickd the door.

I shouted to my mother "This is the way how to open the door !".]

“Tell me your emotional scars” project (Continuing from 2016)

Center : My wounds, your wounds

* It is posting for a limited time.

* There are scenes from bass sound sources. Headphones are recommended.

* It is posting for a limited time.

The Potential within Atsushi Watanabe’s Art

When Marcel Duchamp's artwork The Large Glass cracked, he decided it was a good thing. Atsushi Watanabe draws upon his experience as a hikikomori in his performance of retreating into a concrete space before breaking through the concrete wall a week later; he then mends the cracks using the Japanese kintsugi method.

This art of cracks and kintsugi extends to the disks in which he has spelled out inner pain. Watanabe creates a disk and smashes it with a hammer, then reconstructs it. As the disks multiply, the lines of the cracks connect from the edge of one disk to another, creating a pattern that brings to mind the minimal art of the "priestess of polka dots" Yayoi Kusama or the spot paintings of Damien Hirst. But Watanabe's circles are cracked.

In both the Japanese styles of Yamato-e painting and Ukiyo-e prints, the lines are everything. Methods of painting without the use of shadow led to the emergence of a beauty and worldview focused on lines and surfaces (also known as "super flat"). These lines were created with fine point brushes, or sharp chisels used to etch woodblocks, but the most beautiful, natural, and vivid lines may be those cracks that are formed unintentionally, as seen in Duchamp’s work. These lines are like the sudden accidents of psychological scars that appear in our lives. Moreover, Watanabe embosses these lines with gold paint as if to draw attention to them. The cracks become glimmering lines of light that beautifully embellish Watanabe’s chosen words telling the pain of people's hearts and his own memory of being a hikikomori.

Why do people become hikikomori? Nobody can know the reason deep in the heart besides the people themselves—and perhaps even they do not know. After his own hikikomori experience, Watanabe has endeavored to reconstruct, retreat within, and escape from a space of hikikomori—not simply once, but repeating the process again several years later. This practice brings to mind the Buddhist monk Bodhidharma who sat facing the wall of a cave and mediated in search of enlightenment. What is it that Watanabe thinks of and sees while enclosed in his small space? What does he sense as he breaks through the concrete wall, emerging like a bird that chips away at the eggshell from inside, and what does he feel as he mends those cracks?

The Zen researcher D.T. Suzuki writes in his book The Essence of Buddhism that we live in two worlds: the everyday emotional and intellectual world, and another spiritual world. Usually the latter world cannot be seen or felt, but it contains something that might be called eternity. Watanabe becomes a hikikomori, smashes the world, creates cracks, and mends them with golden lines. That behavior can be thought of as almost a form of Buddhist training, through which Watanabe is trying to reach eternity.

Good art is distinguished by its simplicity and strength. Christo created his own art style from the simple act of wrapping; On Kawara only wrote dates; Yayoi Kusama's trademark is the multiplying polka dots. Watanabe's art of cracking and mending evokes that kind of simplicity and strength. As Christo wraps, Watanabe cracks. He writes short words like Kawara's "Today," and pours his soul into the moment of cracking. He creates and connects circles like Yayoi Kusama. Atsushi Watanabe builds upon the various experiments of contemporary art, and condenses them into the simple style of cracking and mending. This is the achievement of his art, and its even larger potential. 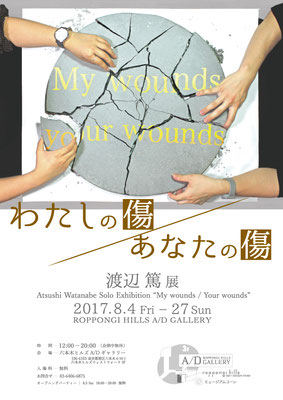 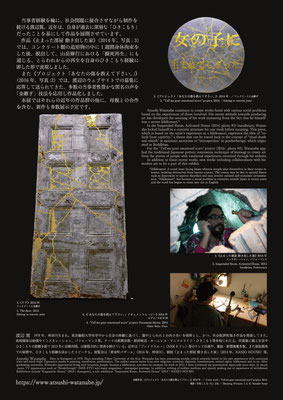 [ Cooperation in setting up ]

contributors to the "Please tell me your scars" project

Contemporary artist. Since attending Tokyo University of the Arts, Atsushi Watanabe has been presenting socially critical artworks based on his own experiences with emotional scars and mind traps. Watanabe mainly focuses on painting, but also uses other media, such as installation, photography, and performance. The subject matter varies from new religions, economic disparity, homelessness, animal rights, gender, hikikomori to mental illnesses. After graduating university, Watanabe experienced living with homeless people, became a hikikomori, and then he resumed his work in 2013. In 2016, he joined ARTIST’S GUILD.